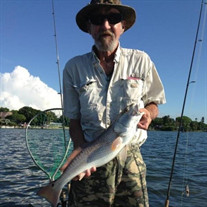 ﻿Owen, William “Wild Bill” Robert 71, of Pinellas Park passed away October 14, 2020. Bill was born July 30, 1949 in Sayre, Pennsylvania. He grew up in Towanda, Pa. He was a 1967 graduate of Towanda Area High School. Bill became a resident of St. Petersburg, Florida in 1970. He moved to Pinellas Park in 1983. Throughout his life he worked at Florida Power, Cocoa and Southern Masonry and then began his career in Construction Surveying and Layout. He always pointed out with pride buildings throughout Pinellas and Hillsborough counties. His final project was the Ovation in St. Petersburg. He enjoyed coaching little league baseball and football and playing softball and bowling. He was fearless racing his Bultaco. Satisfied his need for speed with his little MGs. While in Pennsylvania he enjoyed backpacking, hiking and floating down the river. His most valued treasure was his family. He is leaving quite the legacy. He was preceded in death by his parents Gordon and Marie Owen, sisters Joy Cain, Judith Hursh and Emily Turner and his wife and “sweetie” Barbara Owen. Survived by his daughters and their spouses Lisa and John Parker and Cristina and Michael Sturms, Stepdaughter Donna and Freddy Zand. Beloved grandchildren RC, Dustin, Shayne, Lauryn and Larissa Evans, Cayleigh and Spencer Sturms, Sandor and Derek Kriston and Amanda Norris. Great Grandchildren Aubrey, Marcus, Caleb, Jackson, Alexis, Emmalynn, Owen, Cheyenne, Lila, Grace and Benjamin. Nephews and their spouses James and Roberta Cain, Brian and Kim Turner and Robert and Athena Hursh. Nieces Marie Cain and Tara Turner. Great Nephews and Nieces James, Francesca and Noelle Cain, Morgan Sicuro, Karlie and Shelby McKernan, Micaela, Logan, Parker, Blakeley and Emerson Hursh and Brothers in law Blair “Bill” Hursh and Scott Turner. His faithful pup Tahnee and other loving family members and a host of dear friends. He never knew a stranger. Bill was very proud of his Pennsylvania roots and its natural beauty. He always shared his love for the outdoors and mother nature. Out on the water fishing is where he truly felt at home, close to his Dad and God. He took anyone who wanted to go and shared his fish and knowledge with many. His boat was named the 5 Ps, a lesson he learned from his dad. Proper Planning Prevents Poor Performance. His boat was set up with everything he needed at his finger tips or within arm’s reach. Catch Em Up! He never left the house without his camera. He took pictures of everyone and tried to capture people in the moment rather than waiting for a pose. While on the water he captured daily sunrises and loved sharing them with everyone on Facebook. Whenever complimented he said I can’t take the credit it is the Lord’s paintbrush. He was a diehard Pittsburgh Steelers fan. Tailgating with buddies and witnessing the Steel Curtain in Three Rivers Stadium. Daytona International Speedway was his home away from home twice a year. He made so many treasured friends there. Turn 3 Tiki Bar was well known and enjoyed by many. Cheering on Dale Earnhardt from his platform. He was a huge Tampa Bay Rays fan and attended the inaugural game with family. The Tampa Bay Lightning were his favorite hockey team. He was so proud they brought the Stanley Cup back to the Bay! He was a lover of music of all genre and passed that love on to all who knew him. He played guitar, harmonica, wrote songs and sang. He enjoyed going to concerts, festivals and just hanging out listening to tunes. Rarely was there a time that a guitar wasn’t present and played at family functions. So crank up the jukebox, sing like no one is listening and When you get the chance to sit it out or dance, DANCE! A graveside service will be held at Memorial Park Cemetery on Thursday October 29, 2020 at 11:00am.

The family of William Robert "Wild Bill" Owen created this Life Tributes page to make it easy to share your memories.

Send flowers to the Owen family.