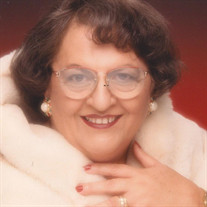 Urania Glicos passed away just shy of 90 years old on Tuesday May 10th, 2022 at the Heather Hill Hospice House in New Port Richey, FL from Heart Failure. Urania lived a long and full life. She was born in Amfikleia, Greece to parents Maryloula Maria and Alkiviathi Zahares. Urania was the second of four children, though her eldest sister passed as a toddler and she never met her. Her two younger sisters are Soula and Litza. Her brother John predeceased her. Urania was instrumental in helping her grandmother raise her brother and sisters after her parents passed when she was just 13 years old. Her grandmother was a shaping force in her life and was described as nurturing, a talented cook and also was said to be incredibly kind. Urania’s Uncle, John Zahares, immigrated to America and married Leona; they called for Urania, now a young woman, to move to America and start a new life. On her journey over, she interacted with the captain of her ship, who could not master the saying of her name. When he asked her what it meant, she said “sky”. Since it was raining that day, both decided her nickname would be “Rainy” (Ranie), a nickname that stuck for the entirety of her life. Leona and John welcomed Ranie as one of their own. She learned the language, the American way of doing things, and shared her Greek culture with her new family and friends. It was at this point that she became active in the Greek Orthodox church in Portland, where she sang soprano in the choir. One day, she set eyes on a young sailor named George, who was in port on a Greek naval ship. They courted for three full days prior to getting married. Ranie lived with the love of her life for nearly 58 years. During their early years they resided in Westbrook, Maine, where they had three children. David born in 1964, Maria born in 1970, and Dean born in 1974. In addition to her newly created family and the extensive Zahares clan, she also had the other Glicos family of Westbrook in Angie and Joanne, and their children Elaine, Katherine, and Nicholas. She would keep in touch with them all up until her last days via phone calls or social media. In the 1980’s, Ranie and George purchased her family’s camp on Crescent Lake in Raymond, Maine. The camp eventually was transformed into their permanent home where they lived for 20 years, hosting numerous parties for their vast network of family and friends. Urania was a fabulous cook and a fan of Julia Childs, who once picked flowers from her front yard which made a significant impression on her. Ranie’s specialties were making pasticcio, dolmades, or spanakopita that friends and family gobbled up when they had the chance. She also had quite the green thumb and would amaze all of us with her ability to not only keep plants alive, but allow them to thrive. This was part of her nurturing personality which many of us experienced on a deeply personal level. In 1992, George convinced her to move to St. Petersburg, Florida and she quickly got to work creating an entirely new network of loved ones to celebrate life amongst. Here, Ranie continued to serve the Greek Orthodox Church, continuing membership as a Daughter of Penelope, the Philoptocos Society, and held many positions within the Church to support events that benefited the community. Her baking skills were put to good use throughout the years. She once was interviewed by the Tampa Bay Times and was consequently crowned the “Kourabedies Queen”; she took pride in that title and posted that article in her kitchen, serving as a reminder to all who entered. Ranie moved to New Port Richey with her husband in 2016; After George passed, she learned to live independently with some support from her family members. It was at this time that despite having low vision, her desire to keep her connection with family and friends worldwide drove her passion for social media. Her intelligent and persistence allowed for her to adapt to this new way of communication and she fully mastered the skill of a good “.GIF” post. Ranie maintained her independence up until the end of her life, when she passed peacefully in her sleep. She always had a way of getting what she wanted. Ranie was surrounded by the love of her family and friends. She is survived by her daughter Maria, son-in-law Mike, grandchildren Zoe and Sophia; Son Dean, daughter-in-law Kristen, grandchildren Scarlett, Savannah Rainie, and Camden, the Glicos and Zahares families of Maine and her beloved cat Gracie who kept her company and watched over her throughout the years. The meaning of her name is sky, and she always said she was a free spirit. She is free now. Free of pain and free of the longing to be back with her husband. Rest well mom. Our love for you is eternal. By Mary Elizabeth Frye Do not stand at my grave and weep I am not there; I do not sleep. I am a thousand winds that blow, I am the diamond glints on snow, I am the sun on ripened grain, I am the gentle autumn rain. When you awaken in the morning's hush I am the swift uplifting rush Of quiet birds in circled flight. I am the soft stars that shine at night. Do not stand at my grave and cry, I am not there; I did not die. Source: https://www.familyfriendpoems.com/poem/do-not-stand-by-my-grave-and-weep-by-mary-elizabeth-frye

The family of Urania Glicos created this Life Tributes page to make it easy to share your memories.

Send flowers to the Glicos family.