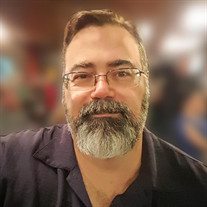 Timothy Cloversettle , 54, passed away October 26, 2021 at his home in St. Petersburg, FL. Tim was born in Tarpon Springs, FL but grew up in Tampa, FL. He was a graduate of Plant Highschool where he successfully played his favorite sport of football. For 27 years he worked as an HVAC Designer and Plumbing Designer at Pyramid Engineering until last March when he was unable to continue due to his illness. Tim loved many spectator sports, especially football and hockey. He enjoyed biking, playing racquetball, and was a fun and very competitive board and video game player with family and friends. He patiently shared many unique games that he discovered while participating in a weekly game enthusiasts club. Tim was an expert diver and introduced the beautiful underwater world to his beloved wife and soul mate JoAnn who always felt safe with Tim as her dive buddy. Tim became an instant father to Jo Ann's 3 boys, at the time ages 16, 12, and 9. Tim's deep laugh was like a jolly Santa Claus, a fitting laugh for his love of Christmas and handing out gifts as "Santa Claus". Tim and Jo Ann loved hosting Christmas with fun gift exchange games, decorations, family fellowship, and good food. He worked on getting the lights on the tree just right and enjoyed putting decorations up outside, preferably on the coldest day prior to Christmas. He loved going to Disneyworld with JoAnn and family members as often as possible and as a new Papaw, he was very much looking forward to showing the magic of Disney to his grandson Conrad who recently turned one. Tim also liked super- hero movies and characters; he was an avid reader of sci-fi/fantasy novels. His current dog Buster was a comfort and joy to him as he became homebound. Tim was preceded in death by his father Charles Cloversettle. He is survived by his wife JoAnn and much-loved stepsons Doug, Glyndon (Jill) and Jeremy (Leigh) Catlin, his mother Hattie Cloversettle, his brother Jim (Shannon) Cloversettle and his sister Carla Cloversettle. Tim loved and was loved by his much-anticipated grandson Conrad Catlin, his aunts, uncles, cousins, sisters-in law, brothers-in law, nieces and nephews. Tim was a giving and steady force, always there for his family and friends. He was our gentle giant who will be loved "always and forever".

Timothy Cloversettle , 54, passed away October 26, 2021 at his home in St. Petersburg, FL. Tim was born in Tarpon Springs, FL but grew up in Tampa, FL. He was a graduate of Plant Highschool where he successfully played his favorite sport of... View Obituary & Service Information

The family of Timothy Cloversettle created this Life Tributes page to make it easy to share your memories.

Send flowers to the Cloversettle family.