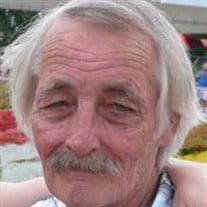 Rick Zawacki, passed away peacefully in his sleep Friday, November 27, 2020 after a yearlong battle with lung cancer. He is survived by his wife, Pam; son, Chad Duval; daughter, Nicole Pasek; and three granddaughters, Penny, Rory, and Riley. In 1949, Rick was born in Paterson, New Jersey to Katherine & Walter Zawacki. They later moved to Saint Petersburg, FL. He was one of six children and is survived by his siblings, Linda Parkansky, Kathy Matson, Sheila Holland, Joe Zawacki; and was preceded in death by his brother Walter Zawacki. Rick ran track in high school, liked to fish, and loved his cars, especially his Corvette and Camaro. He was an Army veteran and served in the Vietnam War. He worked for many years at GTE/Verizon and was able to retire early and spend his free time watching Clint Eastwood films and hanging out with his three granddaughters. He was known as, “Papa,” to them. He spent time traveling with his family and was even able to visit the country of Poland where his ancestors are from. He was a good husband, a wonderful father, and the best Papa ever. He will truly be missed, but his family is grateful for the many memories they have had together. Services are postponed until it is safer to gather.

The family of Richard "Rick" F. Zawacki created this Life Tributes page to make it easy to share your memories.

Rick Zawacki, passed away peacefully in his sleep Friday, November...

Send flowers to the Zawacki family.