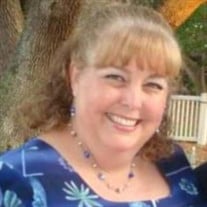 Loving, strong, beautiful, cheerful, brilliant, giving, caring, helpful, kind, funny, creative, musical, amazing, brave, and so many more adjectives describe the most phenomenal person many people have ever met. Martha "Marti" Lynne Lewis Bouknecht always put everyone else first and kept all thoughts positive. There was nothing she wouldn't do for those she loved. After earning a Bachelor's Degree from USF College of Nursing, Marti went on to pursue her passion: working with children. She worked as a Registered Pediatric Nurse at All Children's Hospital for over 20 years. At the same time, she was an active volunteer in her daughters' school, acting as PTA president, becoming volunteer of the year for numerous years. Even as her daughters became older, she remained active in their passions, which was also a passion of hers. Marti's high school years were consumed by fond memories of marching band and music, where she played the flute and even made memories with her future husband and many who are now her family. She was able to see her daughters build the same memories she was able to build, as they were in marching band as well--Marti acted as president of the Band Boosters for most of their high school years, going the extra mile and doing so much more than just being their biggest sideline cheerleader. She was the "band mom" and surrogate mom to many, many kids over the years. Marti carried a smile on her face no matter what struggle she faced. Her laugh will carry on--she always said, "sometimes you have to laugh just to keep yourself from crying." As we think of Marti, we will forever remember the memories and though we want to cry, we will laugh for that is what Marti would have done. Marti was the beloved daughter of Dr. Ralph and Ann Lewis, loving sister to Ralph "Chip" Lewis, Elizabeth "Betsy" Sorenson, and Carolyn "Lyn" Holzer, devoted wife to Michael Bouknecht, world's best mother to Sara Malee and Lynne Bouknecht, and amazing grandmother to Madilynne Marie Malee. She was also an aunt, friend, and mentor to many who will miss her dearly. A Celebration of Life for Marti will be held for those who knew her and were touched by her love. Walsingham Park, Pavilion #1, 12615 102nd Ave, Seminole, FL 33778 on May 8th from 1:00pm-4:00pm, open time to come and go to visit and celebrate with family and friends. "In Lieu of flowers, donations may be made to Children's Miracle Network Hospitals

The family of Martha Lewis Bouknecht created this Life Tributes page to make it easy to share your memories.

Send flowers to the Bouknecht family.