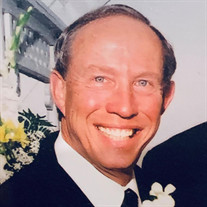 Louis Lamborn “Duke” Wheeler passed away peacefully surrounded by his family on September 28th in Ocala, Florida. Born December 14, 1942 in St. Petersburg, Florida, he followed in his father’s footsteps and attended the United States Military Academy at West Point after an appointment from William Cramer. After graduating in 1965, Duke married the love of his life, Sally Weihe, on June 19th in St. Petersburg. Duke served 2 combat tours in Vietnam where he earned multiple combat citations. After being discharged from the regular Army in 1977, Duke continued his service in the U.S. Army Reserves where he eventually retired Lt. Colonel. He became a nuclear engineer and worked for Westinghouse at the Idaho National Engineering Laboratory in Pocatello, Idaho, and then for the Nuclear Regulatory Commission in Rockville, Maryland. Duke and Sally were lifelong and active members of Lutheran churches in the many Army posts and cities where they lived. Duke was a devoted husband, father and grandfather. A proud Army veteran whose life was dedicated to service, Duke was an Eagle Scout and involved in the Boy Scouts of America, United States Power Squadron, Coast Guard Auxiliary, St. Petersburg Yacht Club, and HOA of Sago Point. Duke and Sally fulfilled a dream to move back to Florida after they retired in 2004 and lived in Largo for sixteen wonderful years. With Duke’s declining health, the couple moved to Ocala last year where their son Greg and daughter-in-law Donna were close by for support. Preceding Duke in death were his parents, Brig. Gen. Lester L. Wheeler and Dorothy Hutchin Wheeler, and brother Thomas H. Wheeler. Left to cherish his memory are his loving wife of 56 years, Sally; his sister Helen Buckley; son Gregory and daughter-in-law Donna; son Geoffrey and daughter-in-law Hollen; grandchildren Dana, Reagan and Hutch. The family would like to thank the doctors, caregivers and staff who took such great care of Duke in the past few years, to include Tierney Washington and the clinicians of Encompass Health. In lieu of flowers, the family suggests donations to the Parkinson’s Foundation or charity of choice. Services will be Wednesday, October 20th at 11:00am at Memorial Park Funeral Home in St. Petersburg, followed by the internment at Bay Pines National Cemetery and reception at St. Petersburg Yacht Club.

The family of Louis "Duke" Wheeler created this Life Tributes page to make it easy to share your memories.

Send flowers to the Wheeler family.