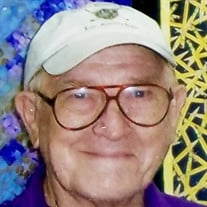 Lloyd I (“Rusty”) Haak, 92, passed away on June 4, 2021. He was born February 19, 1929, in Palmyra, New York to Isaac and Mae Vassar Haak. After his father died in an accident taking down a tree at the Vassar family orchards and his mother became very ill, Rusty grew up in the Hillside Children’s Home in Rochester NY. As a red-headed boy, they called him Rusty, a name he carried all his life. Never adopted, he was well cared for by Mr. and Mrs. Kenneth and Marie Messenger. A very athletic young man, he excelled in track and cross-country events. After high school graduation, Rusty served in the U.S. Navy from 1948 to 1952 seeing active duty during the Korean War and in Morocco. He met Nancy K. Osmon of St. Petersburg, Florida at a USO dance at Patuxent Naval Station in Maryland. They married December 27, 1952 and eventually settled in Oxon Hill, Maryland where they raised their family. As a family, we all enjoyed drives through the history-rich region, stopping at battle fields, hoping to find bullets and climbing on cannons. Rusty bowled semi-professionally, teaching his children the sport, as well. The family all square-danced for years, loved listening to barbershop and bluegrass music. We went camping as a family, getting to see some of the wonders of our country. After retirement, Rusty and Nancy joined the Workamper program, spending many summers visiting National Parks and making many friends. They also worked as volunteers for the Hospice Thrift Shop and at the polls during elections. Rusty also loved crossword puzzles, building or refinishing things with his own hands, cooking, reading , hugs and getting most of the answers on Jeopardy. Rusty had a long career in transportation in Washington, DC., including sightseeing busses, taxis and then, Limousine Services. During those years he drove for many a politician, celebrities of stage and screen and music, influential chiefs of industry and business and heads of state. He became friends with Princess Muna Al-Hussein of Jordan and her two sons when she came to the U.S. to spend time with them on school breaks. One of those boys was Abdullah, the current king. In 1981 Rusty and Nancy moved to St. Petersburg, FL, to move in with Nancy’s mother, Mrs. Edna Seed Osmon, until she passed at the age of 96. A committed Christian, Rusty was a loving and dedicated husband, father, grandfather and great-grandfather. Survivors include his wife, Nancy, sons Russell Kenneth Haak (Joyce) of Round Hill, Virginia and Andrew Thomas Haak of Riverview, Florida, a daughter Holly Hines (Brad). He has five granddaughters, Linda Hines Holloway (Chris), Andrea Haak Lucero (Rhys), Emily, Melody and Stephanie Haak and two great-granddaughters, Sanctuary Lucero and Leighla Lucero. Please make memorial gifts to Suncoast Hospice Foundation: Empath Choices for Care, 5771 Roosevelt Blvd. , Clearwater, Florida 33760

The family of Lloyd I. "Rusty" Haak created this Life Tributes page to make it easy to share your memories.

Send flowers to the Haak family.