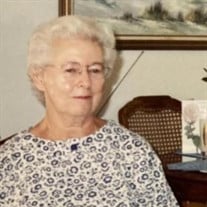 June Wells Coston was the youngest of eight children born to Floyd Benton Wells,Sr. and Elsie Viola Lewis Wells in small Massachusetts town of Cheshire in the Berkshire Mountains. She was born at home, delivered by the town doctor. She attended... View Obituary & Service Information

The family of June Coston created this Life Tributes page to make it easy to share your memories.

June Wells Coston was the youngest of eight children born to...

Send flowers to the Coston family.