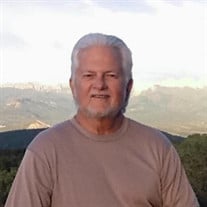 John W. Williams, Jr. left his world on April 2, 2022 at age 80 with his family by his side. Born in Gainesville, Florida, John graduated from Northeast High School, University of Florida and University of Florida College of Law. John practiced law for 54 years; beginning his career in Titusville, Florida. Returning to St. Petersburg in 1974 he soon founded the firm of Williams, Brasfield & Wertz. In 1999 he became a sole practitioner until his retirement in 2019. John was passionate about his practice and devoted to his clients. He was known for his civility, honesty, and integrity. He had many accomplishments and held numerous committee appointments throughout his career. John led an adventurous, fulfilling life that included traveling with his wife of 36 years, Laura. They were often joined in their travels by family and friends. John loved having a good time and making sure everyone with him enjoyed themselves as much as he did. Whether he was spending time with his grandchildren, traveling, attending a concert, relaxing on the beach, hiking a 14er, attempting a bogey, diving for "bugs" or sitting on the deck of his Colorado home, John celebrated life. In addition to his wife Laura, John is survived by his son Jay (Janice); daughter, Nila Gaspar; two grandchildren, Lange and Grace Gaspar; brother Jim (Denise) Motes; sisters Holly Williams and Judy (Robert) Serata; stepmother Ingrid Williams; seven nieces, three nephews, and two great nieces. Please join us on Saturday, April 9th at 4:30 pm at The Karol Hotel, 2675 Ulmerton Rd., Clearwater, to celebrate John. In lieu of flowers please consider a contribution to one of John's favorite charities: Saving the Children, Feeding America, Habitat for Humanity, Southeastern Guide Dogs or a charity of your choice. Please visit www.memorialparkfuneralhome.com for Celebration of Life information.

The family of John W. Williams Jr. created this Life Tributes page to make it easy to share your memories.

Send flowers to the Williams family.