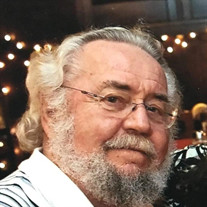 Hillary “Payton” Major Cherrix, 83, of Largo, Fla., formerly of Delaware, passed away on November 25, 2020 in his home. Born in Greenbackville, Va., on October 20, 1937, Payton was the youngest son of Major and Bernice (Mason) Cherrix. Despite moving around in his adult life, he always considered himself a son of the Mid-Atlantic. He graduated from Wilmington High School and as a young adult was known for his skill in partners roller skating. After high school, Payton followed his father and brothers into the military, serving in both the United States Army and Navy. Payton served in NASCAR pit crews for many years and helped build engines for Richard Petty; he never met a car he couldn’t understand. Most Sundays, you’d find the race playing on his television. He moved to Florida later in life and worked in mechanics, banking, hardware, and the postal service. After retirement, he enjoyed traveling with his wife Juanita, and showing refurbished antique model cars. He was an avid cake and cookie baker. Payton was affable, generous, and kind. He made friends wherever he went and loved being mistaken for Santa by little children. He was especially grateful for his community of friends at Palm Hill park who befriended him after the death of his wife in 2017. He is survived by his sons Jim (Barbara) and Dean Cherrix of Delaware; grandchildren James, Jessika, and Kenny Cherrix, Michael Hill, and John(Miho), Jennifer, Katie, Elizabeth (Scott), and Seth (Kaya) Denlinger; many great-grandchildren; and multiple nieces and nephews. He was preceded in death by his wife Juanita; his parents, Major and Bernice; and his three older brothers, Gilbert, Byard, and Paige Cherrix. Payton will be missed as a father, Poppop, great-grandfather, and friend. His enjoyment of life was an inspiration to many.

The family of Hillary "Payton" M Cherrix created this Life Tributes page to make it easy to share your memories.

Send flowers to the Cherrix family.