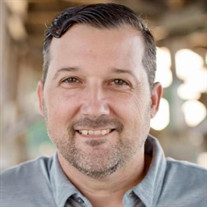 Benjamin John Siwinski 7/3/73 - 6/8/22 Benjamin John Siwinski, age 48, passed away peacefully at his home in St. Petersburg, FL on Wednesday, June, 8, 2022 among his loving family. Born July 3, 1973 in Rockville, CT, the son of Raymond M. and the late Jane M. (Salvini) Siwinski, Ben was raised in Enfield, CT and graduated from Enfield High School. He attended Florida Tech in Melbourne, FL where he graduated with a Bachelor’s degree in Airway Science and met his wife and soulmate Stephanie. He was also a brother in the Chi Phi fraternity. Ben was predeceased by his mother, Jane (Salvini) Siwinski, and uncle, Ronald Siwinski. He is survived by his wife of 22 years Stephanie, daughters Maddie and Avery Siwinski, their family dog Brady, his father Raymond and wife Elizabeth Siwinski of St. Petersburg, FL, his brother Peter and wife Karen Siwinski of San Francisco, CA, his Aunt Joyce and Uncle Eugene Clifford of Williamson, NY, his Aunt Judy Siwinski of Manley, NSW, Australia, his sister-in-law Tina Peters and husband Geoff Lange of Glen Ellyn, IL, and his mother-in-law Erika Elkins of Portland, ME, as well as numerous cousins, nieces and nephews, colleagues and dear friends. Ben enjoyed a successful career in engineering, planning and environmental services. Ben’s most recent position was leading the Tampa and Sarasota offices of VHB as Gulf Coast Managing Director. He was known to his colleagues as an inspirational leader, mentor, and friend. He was an avid sports fan rooting for the Tampa Bay Rays and Lightning with his daughters, but he always stayed true to his New England roots as a Patriots fan. In high school, he excelled at baseball and hockey. Later he ran several full and half marathons, played on a local Aussie rules football team, and hosted ping pong tournaments in his garage with his friends. Ben loved traveling with Stephanie and his daughters. Ben had an amazing sense of humor and always had a smile on his face. A friend of Ben’s commented “the world needs more Bens”. He will be missed by all who knew and loved him. A celebration of his life will be held in early July. Charitable contributions in Ben’s name can be made to the American Cancer Society Relay for Life: https://secure.acsevents.org/site/STR?fr_id=103589&pg=personal&px=57698398

The family of Benjamin John Siwinski created this Life Tributes page to make it easy to share your memories.

Send flowers to the Siwinski family.