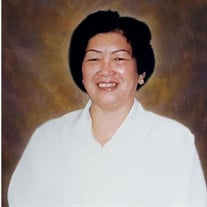 Ung Sieu Tran passed away peacefully at age 79 on Thursday, January 14, 2021, at Northside Hospital in St. Petersburg, Florida. Born in Haiphong, Vietnam, Ung was only seven years old when she and her parents were separated amidst the chaos of Vietnam’s civil war, never reuniting again. At the time of her passing, the family still did not know who her parents were. In 1985, after the Vietnam War, Ung eventually made her way to Florida as a refugee with her three children. Ung was a devoted volunteer of the Tay Phuong Buddhist Temple in Pinellas Park, Florida, involved in the activities of the temple and maintaining close ties with the Buddhist monks. She enjoyed going for walks to Sirmons Lake to feed the ducks and to relish the outdoors. Ung often had her folding chair and lounged for hours on end – enjoying the windy breeze and the birds flying over. She would often walk to visit family and friends that lived a few blocks away from the lake and her home. Ung was a beloved and loving mother, grandmother, and great grandmother. She was always truthful and honest with her family and friends – never afraid to say what was on her mind. Her smile and laughter would light up rooms. She is survived by her three children and their spouses, Thang Tu and spouse Quyen Chau, Lan Mach and spouse Vo Huyen Mach, and Ha Fu Tran and spouse Thư Nguyên; seven grandchildren and their spouses, My Hanh Guerrero and spouse George Guerrero, Michael Mach, Michelle Nelson and spouse Clark Nelson, John Chau and spouse Noy Chau, Melissa Tran, Angela Tran, and Sophia Tran; and six great-grandchildren, Destini Guerrero, Jyrome Siharath, Akai Chau, Aliah Guerrero, Ameilyah Chau, and Makaio Nelson. Ung will be dearly missed by many family, extended family, and friends. The family would like to thank everyone for the continued thoughts, prayers, and support. A memorial service will be held at 12:00pm noon on Sunday, January 24, 2021, at Memorial Park Funeral Home and Cemetery, 5750 49th St N, St. Petersburg, FL. A viewing followed by a Buddhist ceremonial prayer will be held from 12:00-2:00 p.m. at the funeral home.

Ung Sieu Tran passed away peacefully at age 79 on Thursday, January 14, 2021, at Northside Hospital in St. Petersburg, Florida. Born in Haiphong, Vietnam, Ung was only seven years old when she and her parents were separated amidst the chaos... View Obituary & Service Information

The family of Ung S. Tran created this Life Tributes page to make it easy to share your memories.

Send flowers to the Tran family.