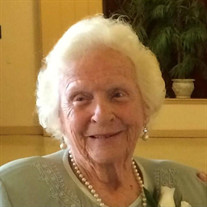 Sarah (Sally) Brennan Pope of South Pasadena, Florida passed away on June 8, 2021. She was 96 years old. Sarah was born in Castlecomer, Co. Kilkenny, Ireland on June 11, 1924 to Lena and John Brennan. She grew up and was educated in Castlecomer and remained there caring for her grandmother until her grandmother’s death in 1947. She then moved to London where she met Robert Pope. Sarah and Bob were married in London on May 21, 1949. They celebrated 65 years together prior to his death in 2014. In 1955, Sarah and Bob began a great adventure and moved to the United States. They began their life in America settling near family in Hastings-on-Hudson, NY. Sarah worked at the Center Restaurant in Hastings and at the Restaurant in the Sky in Yonkers, NY. In 1970, Sarah and Bob moved to South Pasadena, Florida were Sarah began working at Leverocks Restaurant in St. Petersburg. She became as much a longtime fixture and a valued member of the St. Petersburg community as she had been in Yonkers and Hastings. Sarah was a longtime parishioner of St. John Vianney RC Church in St. Pete Beach, the Legion of Mary and the Catholic Daughters of America. She is predeceased by her husband Robert, her parents, her brothers Jack, Michael (Mikey), Paddy, Joseph (Joe), and Richard (Dickie) Brennan, a sister Helena (Ena) Oldfield, a niece Eileen Williams, and a nephew Richard Brennan. She is survived by nieces and nephews John and Paul Brennan and Maria Dowd in Ireland and Christopher Oldfield, Lindsay Keegan, Ann O’Callaghan and John Joe, Michael and Robert Brennan in England. She is also survived by cousins in England, Ireland, New York and Florida. Sarah will be remembered for her love of family, independent spirit, generosity and willingness to help others. Everyone knew Sarah and she knew everyone. She was always upbeat and made everyone’s day a little brighter. She made people feel that they were special, and that they belonged. In 2019 Sarah made her final trip home to Ireland where at age 95 she reconnected with family and old friends and charmed folks so much that the local newspaper featured her in a “Welcome Home” article to commemorate her visit. A Mass of Christian Burial will be celebrated on Tuesday, June 15th, 2021 at St. John Vianney R. C. Church at 10:30 am. Burial will be at Woodlawn Cemetery.

Sarah (Sally) Brennan Pope of South Pasadena, Florida passed away on June 8, 2021. She was 96 years old. Sarah was born in Castlecomer, Co. Kilkenny, Ireland on June 11, 1924 to Lena and John Brennan. She grew up and was educated in Castlecomer... View Obituary & Service Information

The family of Sarah Pope created this Life Tributes page to make it easy to share your memories.

Send flowers to the Pope family.