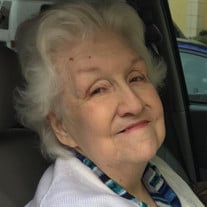 Ruby “Christine” Uhls, beloved Mother, Sister, Aunt, Grandmother, Great Grandmother, and Friend to many went home to be with our Lord on Friday, May 6, 2022. Christine was born in Talbotton, GA on April 21, 1940. She was the first of four children born to Roy Cuthbert and Esther Elizabeth Rodgers. She was raised in the southern tradition valuing the ideals of hard work, faith, culture, and at all times conducting herself as a proper lady. She enjoyed challenging games such as Jeopardy and Scrabble…and she would not “let” you win. 😊 Most of all, she loved her family and would sacrifice anything to make sure they were well provided for. She effortlessly thought of others before herself. Her charity to others knew no bounds. For this and many other characteristics she will be remembered by many. Christine gave her life to Christ at 13 years of age through the influence of her friend, Lucy Strickland, who had invited her to church. Clinging to Christ as her Savior, she never looked back or wavered in her faith. She would continue to grow as a Christian and face some of life‘s most valiant struggles with grace and dignity such as, at the age of 31, the loss of her husband being widowed with three young children. She was a long time member of the Fifth Avenue Baptist Church in Saint Petersburg where many lifelong relationships were formed which exist to this day. Even though she lived in the care of others for the past three years, her faith would never waiver. In love, she would seek to share the gospel through word and deed to the various nurses and personnel. She became like a mother to many of those who were there to care for her gently encouraging them both in their personal and professional lives. Ruby “Christine” Uhls was preceded in death by her husband, Mr. Billy Dean Uhls, Mother, Esther Elizabeth Rodgers, Sister, Mrs. Lynne Clark, Brother, Mr. Roy Rodgers, and Grandson, Pfc. James McClamrock who gave his life for our country (KIA, Iraq, 2010). Mrs. Uhls is survived by her three children: Susan McClamrock (Mark), Billy Dean Uhls (Yova), and Robert Uhls. She is also survived by: Mrs. Shirley Jones, Sister; Grandchildren: Cherie Uhls, Brittany Christine Scott (Justin), Natalia Brooke Uhls, John Mark McClamrock, Kathryn Elizabeth Wentz, Barnes McClamrock (Libby), Harrison McClamrock, and Caroline McClamrock soon to be married on May 21st to the love of her life, Steve. Christine is also survived by many nieces and nephews and lifelong friends. A Funeral Service will be held at Memorial Park Funeral Home and Cemetery on Friday, May 13th, at 12:00 PM. Memorial Park Funeral Home and Cemetery is located at: 5750 49th St N Saint Petersburg, FL 33709 United States All are invited to attend. Interment will be at the adjacent Memorial Park Cemetery following the service.

The family of Ruby "Christine" Uhls created this Life Tributes page to make it easy to share your memories.

Send flowers to the Uhls family.