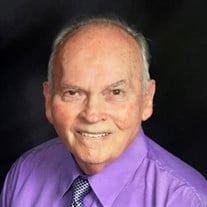 Ronald “Ron” Eugene Morris, age 82, passed away peacefully on April 18, 2021 in his hometown of St. Petersburg, FL with family by his side. He was born September 14, 1938. He is survived by his loving wife of 52 years, Reta, daughters Dawn (Mike), Kristi (Steve), and son Ronald. Grandchildren Anthony, Zach (Rachel), Nick (Elia), Bradley, Cody, Branden, Cameron, Ronald, and Abby. Great grandchildren Miles and Ellie. Ron was a retired “Estimator” and manager for a local construction company. He enjoyed his retirement years with the love of his life, Reta by his side where they stayed active in their community of friends playing chair volleyball, having game nights, and belonging to several clubs. He was a long-time member of the Salvation Army Church where he spent many hours volunteering as a greeter and helping out where needed. Ron was an excellent handyman and had a passion for fishing, hunting, wood working, boating, and collecting coins and antiques. He spent many years playing his guitar and singing, much to his family’s delight. He loved getting together with friends and family playing Johnny Cash, John Denver, Merle Haggard, George Jones, and many more. The family enjoyed playing games with Ron so much, not because he excelled at games (because he rarely won), but because no matter what game it was, he would have everyone laughing uncontrollably. Ron was a proud father of 3, grandfather of 9, and great-grandfather of 2. When his oldest grandson was old enough to talk, he dubbed his grandfather “Pops”, which Ron has been lovingly called since, by everyone in the family. He was clearly a family man who dedicated his life to his wife and children. Everyone who knew Pops loved him. His greatest joy was spending time with his family, laughing and having fun. He laughed at himself often, and when he laughed everyone around him couldn’t help but to laugh too. He adored his wife and they were inseparable for 52 years. Rest in Peace sweet Pops, you will be missed beyond measure.

The family of Ronald Eugene Morris created this Life Tributes page to make it easy to share your memories.

Send flowers to the Morris family.