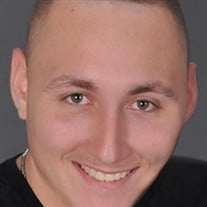 Robert Wayne Abbey, Jr., 31, of Pinellas Park, FL passed away on April 14th, 2021 surrounded by family. Robert grew up in Lady Lake and Ocala, FL and moved to Largo in 2002. He graduated from Osceola High School in 2009. He received his Associates Degree in 2015 and recently completed his Bachelor’s Degree in Business Management and Organizational Leadership. Robert began working for Publix when he was 19 years old, and was regularly promoted. For the last three years he worked as an Assistant Produce Manager. Robert is remembered for being a great son, brother, husband, and father. He was a selfless person who was always there for others and knew how to make you feel special. He was always willing to help out family. Robert was thoughtful, and even though he often kept his feelings to himself he knew the right time to get personal to help someone; his answers came with certainty. Robert was an amazing provider, and loved his kids in a way only he could. Robert loved to laugh and his beautiful smile will be always remembered and greatly missed. Even in his death, Robert cared for others by being an organ donor to help the lives of more than 5 people. Robert is survived by his fiancé, Paula Eastman, and their two children, Ayden and Aubrey; his mother and step-father, Christina and Danny Puckelwartz; his brother, Johnathan, his wife, Brittany and their children, Wesley, Tanner and Blake; his brother, Matthew and his daughter, Elizabeth; his brother, Jeremy and his children, Annabelle and Amberlynn; his sister, Marissa and her son, Maverick; his sister, Sierra and her daughter, Mikensly and son, Colton; his sister, Desiree and his grandparents, Larry and Lillian Burge, Nancy Shave and Danny Puckelwartz Sr. Visitation will be held Friday, April 30th 1-3pm with the funeral immediately following at 3pm. Services will take place at Memorial Park Funeral Home, 5750 49th St. North, St. Petersburg, FL 33709 (727) 527-1196

Robert Wayne Abbey, Jr., 31, of Pinellas Park, FL passed away on April 14th, 2021 surrounded by family. Robert grew up in Lady Lake and Ocala, FL and moved to Largo in 2002. He graduated from Osceola High School in 2009. He received his Associates... View Obituary & Service Information

The family of Robert W Abbey Jr created this Life Tributes page to make it easy to share your memories.

Send flowers to the Abbey family.