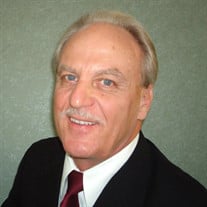 Richard Daughty, age 74, departed this life peacefully on February 10, 2022 at his home with his wife by his side. He had lost his long battle with cancer. He was born in Orangeburg, SC to Mary Virginia West and Ralph B. Daughty on March 27, 1947 the oldest of three children. He grew up in an Air Force family calling many places home, but when asked where he was from, he always said Bellevue, NE where he graduated from Bellevue High School. He served in the army. He graduated with a BS from Florida Technological University and Masters’ programs at Florida State University and University of South Florida. He was a true Renaissance man teaching himself to play multiple instruments, learning many crafts such as batik, portrait painting and silk screening, excelling in the field of economics with wit and humor, and playing golf every week with a new theory on improving his game. His work life was wide and varied from first mate on a tugboat to a behavior specialist working with developmentally disabled children to boat builder to software developer and ultimately to the “job” he loved most, spreading his economic message writing the Mogambo Guru newsletter that always ended with Ugh! His second love was music. He was passionate about Mozart and bluegrass. Played in many bands throughout his adult life including putting his wife through nursing school with a second job playing in a country band. Richard is preceded in death by his parents and brother, Dan Daughty. He is lovingly remembered by his spouse of 43 years, Carolyn Smith; daughter, Joanie Davis; sister and spouse, Deedee and Bob Lester; grandchildren, Jacob and Dylan Weisbaum; nephew and nieces and their spouses, Chris and Alyse Goodwin, Katie Goodwin and Philip Ashley, and Marianne Goodwin and Jon Wolfsberger; great nephew, Jackson Wolfsberger; and, his entire clan of in-laws led by his mother-in-law, Joanne Smith. His influence will forever remain in the lives and hearts of all who knew him. Memorial donations in lieu of flowers may be made to: Humane Society of Pinellas, 3040 FL-590, Clearwater, FL 33759 or to Mises Institute, 518 West Magnolia Avenue, Auburn, AL 36832. A Memorial Service by invitation only will be held on March 27, 2022 in celebration of a life well lived. Condolences may be posted online at www.memorialparkfuneralhome.com

Richard Daughty, age 74, departed this life peacefully on February 10, 2022 at his home with his wife by his side. He had lost his long battle with cancer. He was born in Orangeburg, SC to Mary Virginia West and Ralph B. Daughty on March 27,... View Obituary & Service Information

The family of Richard B. Daughty created this Life Tributes page to make it easy to share your memories.

Send flowers to the Daughty family.