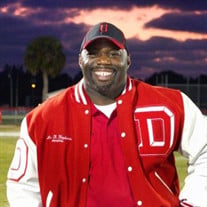 I Corinthians 13:11 NKJV When I was a child, I spoke as a child, I understood as a child; but when I became a man, I put away childish things. Reuben Christopher Hepburn was the eldest child and only son of Christina Hepburn, her “vun son” as she affectionately called him (in her Bahamian dialect). He was born on December 12, 1970 in Miami, Florida. Reuben grew up in a home with his two younger sisters, Rodrika and Regina, and helped raise his youngest sister, Renae, from a distance. Reuben was a very outspoken and charming boy. Our Auntie Nora used to call him the “conman” saying that he was able to talk a blind man out of his stick. It was no surprise to anyone that he became a great orator as he went on to win many oratorical contests throughout his middle school and high school years. In addition, Reuben participated in several mock trials in his high school and college years. During his high school participation in the mock trials he met his lifelong friend and mentor Orlando Prescott. Reuben was educated in Miami-Dade County Public Schools attending Miami Shores Elementary, Booker T. Washington Middle School, and Miami Jackson High School. In the summer of 1988, Reuben began his matriculation at Florida Agricultural and Mechanical University (FAMU), his beloved alma mater. Leaving home for the very first time to attend FAMU, began Reuben’s transformation to becoming a man. Although the road was long and very difficult at times, Reuben persevered in his studies and FINALLY graduated in 1996. Following in the footsteps of his grandmother, Miriam Hepburn, his mother, and his uncle, George Hepburn, Reuben began his career in education with the Pinellas County School District (PCSD) as a History teacher at Lakewood High School. After receiving his Masters in Educational Leadership at the University of South Florida he became an Assistant Principal (AP) at Northeast High School and continued as AP at Gibbs High School. He continued to advance in his career becoming the principal at Dunedin High School and in 2015, Reuben returned to Gibbs as the principal. His exceptional work was noticed on many levels and he subsequently won Principal of the Year in 2020 for PCSD. Reuben was also involved in the community. His commitment and passion expanded beyond the school building as proven by his run for City Commission in 2016 in the city of Dunedin, Florida. His hopes in running for office was to preserve the beauty, charm, and history for a city he loved and adored. He had a vision for the city of Dunedin, as he did with all tasks that he took on for “where there is no vision, the people perish” (Proverbs 29:18 KJV). With all of Reuben’s accomplishments throughout his life, the greatest one being that he accepted Jesus Christ as his personal Lord and Savior at a young age. He was a man of God and his faith was evident in all that he did. In 2008, Reuben was ordained as a minister. He served in various capacities at St. John Primitive Baptist Church and Gateway Christian Center. On Thursday morning, December 3, 2020, Reuben transitioned peacefully from this life to his heavenly home as he gracefully surrendered to God’s will at the age of 49. Reuben is predeceased by his grandmother, Miriam Hepburn. He leaves a legacy of love and many who will miss his physical presence dearly as he is survived by his loving wife, Maribeth Hepburn, his two adoring children Joshua Townsend and Mariela Myrick, his mother and “main girl”, Christina Hepburn, his beloved sisters, Rodrika Lacy, Regina Forbes (Rory), and Renae Strozier (Kyle). He also leaves behind seven nieces and nephews, Miriam Pierre, Christina Trapp, Micah Scott, Cameron Trapp, Mason Lacy, Omari Forbes, and Claire Strozier, a great-niece Hailee Lacy, and a host of aunts, uncles, cousins, and friends. In addition, he leaves his godchildren Tatiana Prescott and Denaria Fuller. Thank you Reuben for your love and support. Our love will never grow dim. **PLEASE NOTE** This is a walk-through visitation only. We are practicing social distancing and you are required to wear a mask!

I Corinthians 13:11 NKJV When I was a child, I spoke as a child, I understood as a child; but when I became a man, I put away childish things. Reuben Christopher Hepburn was the eldest child and only son of Christina Hepburn, her &#8220;vun... View Obituary & Service Information

The family of Reuben Hepburn created this Life Tributes page to make it easy to share your memories.

Send flowers to the Hepburn family.