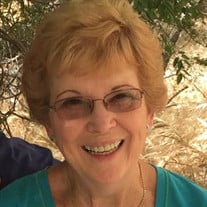 Phyllis M. Berggren, 81, of Pinellas Park, Fla. passed peacefully at home on Wednesday, May 26, 2021. She is survived by her husband, Loren Albert Berggren, and her loving family. She was married for 62 years. A ceremony and the entombment will be held at 11 a.m., Saturday, June 5 at the Memorial Park Cemetery Life of Christ Chapel, St. Petersburg, Fla. Phyllis was born to Ervin C. Carpenter and Avilee B. Reed, on January 14, 1940, in Charleston, W. Va. She was raised in Cross Lanes and attended Nitro High School. After the family moved to Florida in 1957, she attended Northeast High School in St. Petersburg. The following year she married Loren in Tampa. In 1964, they bought a house in Pinellas Park that became their forever home. She was a retired assembly line worker from West, a pharmaceutical services company. She enjoyed bowling, tending to her indoor flowers, and spending time with her cat, Toby. She also liked to travel with her family and friends. She and Loren spent their 60th wedding anniversary in Europe, touring Denmark, Norway, and Sweden. Mrs. Berggren is preceded in death by her parents, her brother Jim Carpenter, and her daughter Lorna Lynn. Survivors include her husband, Loren Berggren of Pinellas Park; two sons, Michael L. A. Berggren and his wife, Chantale, of Oviedo, Fla., and David Jason Berggren and his wife, Bonnie, of Tallahassee, Fla.; six grandchildren, Holly Barrett and her husband, Ronny, of Woodstock, Ga., Lawrence Berggren of Sanford, Fla., Benjamin Berggren and Vincent Berggren of Oviedo, Joshua Berggren and Eva Berggren of Tallahassee; two great-grandchildren, Brooks and Fox; her brother’s wife, Mary Carpenter, of Valdosta, Ga.; a niece, Dawn Carpenter Kent, of Valdosta, Ga., and three grandnephews, Tyson Hall, Colton Harbuck, and Camden Kent, of Valdosta, Ga. Pallbearers will be her sons, grandsons, and grandnephews. In lieu of flowers, please consider a memorial gift – In Memory of Phyllis M. Berggren (1940-2021) – to one of the following: Suncoast Hospice (https://suncoasthospice.org/online-donations/) or St. Jude Children’s Research Hospital (http://www.stjude.org).

Phyllis M. Berggren, 81, of Pinellas Park, Fla. passed peacefully at home on Wednesday, May 26, 2021. She is survived by her husband, Loren Albert Berggren, and her loving family. She was married for 62 years. A ceremony and the entombment... View Obituary & Service Information

The family of Phyllis M. Berggren created this Life Tributes page to make it easy to share your memories.

Send flowers to the Berggren family.