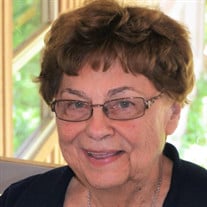 Wilson, Nancy 89, of Kenneth City went to be with the Lord on August 10, 2021. Nancy was an elementary teacher in Hillsborough and Pinellas County Schools. Most of her years were spent as a supervisor with Pinellas County Schools. She particularly enjoyed her years as an ACTT/TIME Supervisor, where she had the opportunity to work with K-12 teachers on communication skills and teaching strategies. During her last years with the county, she worked with Title I and Adult Education. She found it to be a new and interesting challenge. In her twenties, she was a Girl Scout leader in Palma Ceia. That began a lifelong association with a group of girls that lasted into their adulthood. She enjoyed being with friends, family, and going to her North Carolina home with Marianne Easton. She is preceded in death by her parents, Omar and Ethel Wilson; and brother, Omar. She leaves behind her niece, Rebecca Hudson; Rebecca’s children, Jessica and Donald; and her best friend and partner of 35 years, Marianne Easton. The Girl Scout Story: Nancy Wilson was involved in Girl Scouting most of her life beginning as a Brownie in Tampa. In her 20s, she was asked to become a troop leader in Palma Ceia. That began a lifelong association with a group of girls that lasted into their adulthood. In her quiet unassuming way, she taught them consensus building, leadership and a love of the out-of-doors and adventure. This troop became a Senior Mariner Ship (Troop 131), known as the Shangri La. After years of planning and fundraising, the troop took a trip together in 1961 to Bimini in the Bahamas. Nancy became the assistant camp director in charge of program at Camp Dorothy Thomas in Riverview, FL, where many troop members attended as campers, and then as counselors during those years. Sharing her love of the out-of-doors, especially wilderness camping and how to do it successfully, was one of her specialties. Beginning in 1959, many members of the troop were selected to participate in US and International Scouting events and encampments, affirmation of Nancy’s influence in the lives of these young women. In 1965, she and 3 members of the troop traveled by car from Tampa to Idaho for the Girl Scout Roundup, planning this trip via the infamous AAA TripTik. This venture was quite a feat for women for the time. After graduating from high school and moving on to college and other pursuits, the troop contact continued only sporadically. In 2004, several of them decided it was time to see who would be interested in getting together. Nancy and this core group did unite, some from other states, and have come together nearly every year since through 2019. The troop usually stayed at Cedar Kirk Camp and Conference Center in Lithia Springs, to laugh, sing, tell stories, and share their current lives and challenges, and sometimes build a campfire and have S’mores. One member has said, “It was a joy and privilege to become friends as older adults with someone who had such an impact on our formative years.” Nancy, this gentle soul, holds a special place in the hearts of each of these women. Her warm smile and wit will be remembered always.

The family of Nancy Wilson created this Life Tributes page to make it easy to share your memories.

Wilson, Nancy
89, of Kenneth City went to be with the Lord on...

Send flowers to the Wilson family.