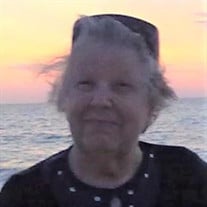 Mary F. Cooley of Pinellas Park, Florida passed away Friday, December 18th, 2020 at Palms of Pasadena Hospital due to ongoing health issues. She was 81 years of age. Mary was born December 26th, 1938 in Warrington England to the late Henry Charles and Florence Dawson. She was preceded in death by her former husband Robert “Bob” Cooley and brothers Eric (Buddy), David, and Cecil Dawson. She is survived by her son, Stephen Cooley (Largo, Florida), and daughter, Sharon Cooley (Seminole, Florida). She was a loving Grandmother “Nannan” to three grandchildren, Chris and his wife Jenn Portwood, Heather Abbott and her fiancé John Webber, and Logan Cooley. Also, she is survived by two great-grandsons Tyler Portwood and Evan Portwood, and by loving nieces and nephews in England. Mary met Bob while he was stationed in England for the US Air Force. They were married in England in 1959 and moved to the US shortly after. She was a devoted Christian and lived daily for God. Music, books, nutrition, the beach, and traveling were all things she enjoyed. She adored her children, grandchildren, and great-grandchildren. Mary loved being around family and friends and will be greatly missed by all who had the pleasure of knowing her. A memorial service will be held at 2 pm December 28th, 2020 at Memorial Park Funeral Home located at 5750 49th St. N. St. Petersburg, Florida 33709. Visitation with family and friends starts at 1 pm. In lieu of flowers, the family is suggesting memorials be made in Mary Cooley’s name to the St. Jude Children Research Hospital at https://www.stjude.org. To share a story or photo, leave a tribute, to offer condolences to the family, or sign her guest book, please visit Mary’s memorial web page at https://www.memorialparkfuneralhome.com.

Mary F. Cooley of Pinellas Park, Florida passed away Friday, December 18th, 2020 at Palms of Pasadena Hospital due to ongoing health issues. She was 81 years of age. Mary was born December 26th, 1938 in Warrington England to the late Henry... View Obituary & Service Information

The family of Mary F. Cooley created this Life Tributes page to make it easy to share your memories.

Send flowers to the Cooley family.