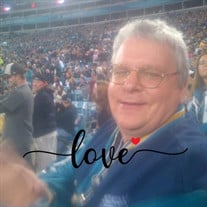 Keith Alfred Reilly: Beloved Husband, Brother, and Uncle, 63, of Jacksonville, passed onto Eternity on Wednesday, April 28th. He was born on October 7th, 1957, in Tacoma, Washington to George and June Reilly as their fourth child and first son.... View Obituary & Service Information

The family of Keith Alfred Reilly created this Life Tributes page to make it easy to share your memories.

Send flowers to the Reilly family.