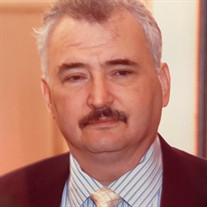 Joseph Walter Yarsawich, Jr., age 68, passed away Tuesday, December 21, 2021, at Suncoast Hospice in Pinellas Park, FL. Joseph was born on August 17, 1953, in New Haven, CT to Joseph Walter Yarsawich, Sr. and Dorothy Olga Yarsawich, née Bryzicki. The family moved to Stratford in 1963, where Joseph was known in the neighborhood as Chip (a “chip off the old block”). He was always industrious, delivering the Sunday newspaper as a child and working in high school at Dunkin Donuts, where he gained much life wisdom from George and Georgette, who also taught him to cook. He spoke fondly of his employers his whole life. He was good with a story and ever the charming salesman, many a time convincing his family, to their chagrin. From the temporary watching of a fluffy white mutt, he soon persuaded his family to adopt her in. He loved Fashka dearly and had a soft spot for animals and children his whole life. As a teen he attracted a wide range of free spirits like himself, often inviting them to stay at his parents’ house for days or weeks, a safe haven where all were welcome—an attitude of hospitality and generosity that he carried with him into adulthood. Joseph married Donna Cosmo at St. Joseph parish in Shelton, CT, on June 22, 1979. They began their married life in Houston, TX, before settling in Shelton to raise a family in 1984, where they lived until retiring to Pinellas Park, FL in 2017. He valued independence and self-sufficiency in his work life. A born entrepreneur and natural salesman, Joseph started and ran three successful small businesses during the technology and internet boom years of the 80s and 90s. He was committed to his Catholic faith and very involved in his community at St. Joseph, where he participated in the Men’s club, Knights of Columbus, and choir, spending many an evening and weekend volunteering at church events. His greatest passion, however, was for his family. His choice for self-employment was in part driven by the freedom it gave him to spend time with his sons. From local hikes and camping, to surprise day trips to Boston, to coaching little league, he filled their young lives with loving attention and presence. During their teenage years, he founded Venture Crew 2828, a division of the Boy Scouts of America. His large personality drew in a circle of young men who saw in him an adventurous leader with a big heart. In later years, he often remarked how this was one of the best things he had done with his life, being a mentor to his “sons by association” and creating opportunities for them to experience the world in the values of Scouting and personal growth. He was a father figure to many kids throughout his life, welcoming his sons’ friends into their home as extended family. He was loved and will be missed by many. Joseph is survived by his loving wife Donna; sons Brian Yarsawich and Christopher (Nicole) Yarsawich; grandsons Christopher John Yarsawich, Jr., and Joseph Walter Yarsawich, III; sisters Jean Yarsawich and Cathy (Mike) Axel, and his godson and nephew Michael Axel. A viewing will be held on Wednesday, December 29th from 5 – 7pm at Memorial Park Funeral Home in St. Petersburg, FL. A Mass of a Christian Burial at Sacred Heart Catholic Church in Pinellas Park on Thursday, December 30th at 11am, with entombment to follow at Memorial Park Cemetery.

The family of Joseph Walter Yarsawich Jr. created this Life Tributes page to make it easy to share your memories.

Send flowers to the Yarsawich family.