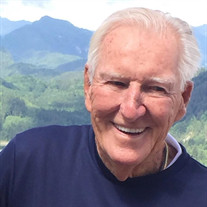 John Edward Schleicher, Sr., 85, of St. Petersburg, Florida, passed away on his own terms at home with his loving family at his side on Sunday, May 30, 2021. He was preceded in death by his parents, Earl ‘Nick’ and Mary Schleicher and his brother, Carl ‘Nicky’ Schleicher. John was born in Morristown, NJ and grew up in Boonton, NJ. He graduated as a proud member of Boonton High School class of 1953 where he excelled as an All - County athlete in both baseball and basketball. John graduated from Gettysburg College with a business degree, a wife, and a baby, moved to Denville, NJ, where he and his wife, Judith lived for 55 years raising five children before moving to St. Petersburg, Fl, aka ‘Paradise’ in 2015. Upon graduating college, John set out to work hard to achieve the American Dream of growing a loving family, of finding a secure job, and of affording the perfect house in the suburbs – and not only did he realize his dream, he was generous with the fruits of his achievements with others! John spent 15 years in the textile industry before venturing out to start his own business as he knew that to be able to earn enough money to support a large family, he needed to be an entrepreneur. Although he found being an entrepreneur was the hardest thing one can do, he built a prosperous international business, Ultraflex Systems, Inc., selling textiles and digitally printable substrates for the sign, floor graphics, billboard, and building wraps industries. Charismatic and very social, John loved life and life loved John. He would light up any room he entered. A generous man, he enjoyed Judy’s big Italian dinners where both family and friends would gather to eat, drink, laugh and listen to John regale us with stories of his life along with his bad jokes and even worse singing of ‘Edelweiss’ and ‘My Way’. John and Judy traveled all over the world - 34 countries at last count including many trips to Italy as John loved all things Italian. Often their trips included one or more of his children so he could show them the fantastic wonders of the world! Ever the athlete, John was an avid skier and first-rate tennis player. He loved his tennis and was a fierce competitor on any court he played, especially at Isla del Sol Yacht & Country Club. He also loved lobster, his ‘man cave’, his cactus garden, dipping in the pool, and boating around Boca Ciega in St. Pete. Most of all, John was a terrific role model as a dad to his kids and their spouses and a pop- pop to his grands and great grands. He is survived by his devoted and loving wife of nearly 65 years, Judith Pelos Schleicher. The mark of a good man is happy and successful children. All five of his children were very special to him. Surviving are his children, Blair Schleicher Wilson; Lianne Adams (Tim); John Jr. (Susan); Krista Newton (Brian) and Kurt (Diane). He was the proud grandfather of thirteen wonderful grandchildren and fourteen great grandchildren. John also leaves his sister, Sherry Schleicher of Boonton, NJ; his ‘adopted’ son Mohammad Essam and many loving friends. He leaves a legacy of a large, wonderful loving family, a loving wife, a business he built from the ground up and the gusto for living a well lived life. Visitation will be held on Friday, June 4, 2021 from 10am until the time of service at 12pm at Memorial Park Funeral Home and Cemetery, 5750 49th Street N. St. Petersburg, FL. In lieu of flowers, his family asks that donations be made to POWWW, PO Box 438, Denville, NJ 07834

John Edward Schleicher, Sr., 85, of St. Petersburg, Florida, passed away on his own terms at home with his loving family at his side on Sunday, May 30, 2021. He was preceded in death by his parents, Earl &#8216;Nick&#8217; and Mary Schleicher... View Obituary & Service Information

The family of John Edward Schleicher Sr. created this Life Tributes page to make it easy to share your memories.

Send flowers to the Schleicher family.