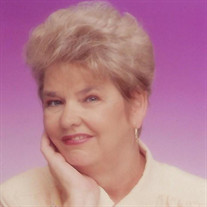 Janet Bogdahn Robinson, 77, of Zephyrhills, Florida passed away on November 2, 2020 after a recent cancer diagnosis. She is predeceased by her beloved husband of 51 years, Norman Robinson. She is survived by their son Mark and his wife Patty, of Saint Petersburg, Florida, and their daughter Kelly Nelson and her deceased husband, Donny Nelson, of Tennessee. Janet also leaves behind grandchildren Jessica Damoci, Daniel Robinson, Ashley Robinson, Jessica Nelson, Travis Nelson, and Jennifer Sherrill; and great-grandchildren Caleb Smith, Natalie Smith, Emmalyn Nelson, Donny Nelson and Trevor Nelson. Janet was born on July 20, 1943 in Portland, Maine, to Alfred and Margaret Bogdahn, and was the youngest of her siblings Patricia (Graffam), Nancy (Thomas), and Paul. Her favorite childhood recollection begins as a teenager working at an A&W Rootbeer drive-in. One evening, Janet waited on Norman Robinson and he remarked to his best friend, at his first sight of her, "I am going to marry that girl." Two years later, in 1961, they were married; and she waited on Norman and their children every day since. Shortly into their marriage, they welcomed a son, Mark, and then a daughter, Kelly. Her fondest memories include her wonderful family, building their own home, family vacations, and long weekend camping trips in the great outdoors where the family told stories and roasted marshmallows around campfires. Although they often traveled the East Coast, they were able to make it as far west to visit the Grand Canyon. It was on their trips south when they fell in love with Florida's sunshine and eventually made Zephyrhills, Florida, their home. They instilled in their children from a young age to have a love of nature, and encouraged freedom to explore, hike and behold nature's beauty in the countryside. These qualities have continued to be passed down through the generations. When not traveling, Janet's professional career centered around her strong work ethic and her innate organizational skills where she held various positions as an Administrative Assistant at Moffit Cancer Center, a legal secretary, and doctor's office assistant. Upon retirement, she was Norman’s full-time caretaker with his advancing Alzheimer's, never once complaining. After Norman's passing 8 years ago, Janet slowly navigated her new circumstance of independence and found a wonderful community of friends (which included many of their Maine and Florida friends). She started playing pool volleyball, bingo, and shuffleboard. Janet never met a stranger and was always ready to open her door welcoming her neighbors knocks and passing an afternoon socializing. She will be dearly missed by her family, friends and her loving and supportive church community, Calvary Chapel. Janet and Norman loved dancing and country music. We take comfort knowing they are now dancing together in Heaven with all her adopted pets looking on. Please view the live streaming of the memorial service, Friday, November 20, 2020, at 2:00 pm by going to the Photo & Video tab and click on the External webcast video. In lieu of flowers, please make donations to the American Cancer Society.

Janet Bogdahn Robinson, 77, of Zephyrhills, Florida passed away on November 2, 2020 after a recent cancer diagnosis. She is predeceased by her beloved husband of 51 years, Norman Robinson. She is survived by their son Mark and his wife Patty,... View Obituary & Service Information

The family of Janet Robinson created this Life Tributes page to make it easy to share your memories.

Send flowers to the Robinson family.