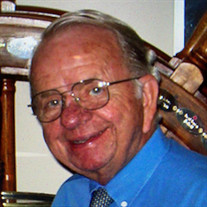 VAN MIDDLESWORTH, James Foster “Jim” 92, of St. Petersburg, passed away Monday, Nov. 1st, 2021, with family at his side. Jim was born in Centerville, Ohio in 1929 to the late La Verne G. and Eva (Graham) Van Middlesworth. Although he was born in Ohio, he was raised and lived in St. Petersburg his entire life and was considered a native. From a young age, Jim was industrious with a strong work ethic. He became a carrier for the St. Petersburg Times while he was still in grade school. He graduated from St. Petersburg High School in 1947. He continued to work for the St. Petersburg Times as a composing room staffer until he entered the Army in 1951, serving in Germany. Upon discharge from the Army, Jim enrolled in Florida State University, Jim completed his B.S. Degree in Accounting in 1956. While at FSU Jim was the treasurer of the Phi Kappa Tau Fraternity and worked for the Tallahassee Democrat as a distributer. His industrious nature led Jim to co-found Van Middlesworth and Company PA, Certified Public Accountants in 1960 along with his late brother Charles Van Middlesworth. Jim actively practiced as a CPA for 60 years. Professionally active, Jim was a member of organizations that promote local business. Jim was president and member of the West Coast Chapter of the Florida Institute of Certified Public Accountants. He also served as a member and president of the Pinellas Industries Association and the Bay Area Manufacturing Association. He was invited to Holland to represent the City of St. Petersburg to share industry practices with local business. Jim was a dedicated member of Sertoma International civic club and spent countless hours in “Service To Man Kind” He served several years as the president of the club and was voted “Sertoman of the Year” multiple years. He was a Life member of the Florida State University Alumni Association. Jim was a long-time bowler. He bowled with the Inter-Civic League for many years and accumulated many trophies that he displayed proudly in his business and home offices. Most importantly, Jim was a husband, father and grandfather who wanted only happiness and success for his children and grandchildren. To that end, he worked tirelessly to provide a life of comfort and opportunity for his family. Jim is survived by his wife Joan, children, James Van Middlesworth, Nancy (Gerald) Lowry, brother; William "Bill" Van Middlesworth; grandchildren Timothy Lowry and Emily Lowry; and many nieces and nephews. There will be a visitation on Saturday, November 13th from 10:00 am until 12:00 pm. At Memorial Park Funeral Home located at 5750 49th Street North, St. Petersburg, Florida 33709.

The family of James Foster Van Middlesworth created this Life Tributes page to make it easy to share your memories.