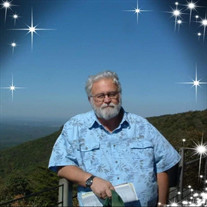 James “Jim” Christian Tappan, age 71, of Lake Wales, Florida, fell asleep in death on October 29th, 2021. James was born August 17th, 1950, in Holyoke, Massachusetts to Lawrence and Joyce Tappan. He spent most of his childhood in Texas and California before settling in Florida where he graduated from High school in Pompano Beach. Thereafter he discovered a talent and skill in sheet metal fabrication, a career he enjoyed for over 30 years. James became a proud father in August of 1972 to a son James Lawrence Tappan. Together they enjoyed hunting, fishing and being outdoors. James married the love of his life, Norma McCormack, on November 26th, 1986. They spent almost 35 cherished years together. Sharing a love for collecting antiques, traveling, and spending time together. They also enjoyed their beautiful home on the lake and spending time with their friends and family as well as their beloved golden retrievers. Remaining to cherish James' memory are his wife Norma Tappan, his son James L. Tappan, his mother Joyce Freland, his sister Jessica Fredericksen, and many extended family members including nephews, nieces, friends, and neighbors he called family. Jim would do anything to help anyone. He was truly humble, kind, and had a heart of gold. Preceding James in death are his father Lawrence Tappan and his beloved stepson Phillip McCormack James is laid to rest in Memorial Park Cemetery. A private Service for friends and family will be announced at a later date.

The family of Mr. James "Jim" Christian Tappan created this Life Tributes page to make it easy to share your memories.

Send flowers to the Tappan family.