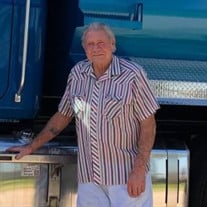 At the age of 78, James “Henry” Ferguson, President of H&H Fergusons’ Contracting, Inc., and life-long resident of Florida, passed away on November 12, 2021, at Suncoast Hospice. Henry is survived by his wife of 60 years, Patricia Ann Ferguson; his daughter Wanda Ferguson, son James H Ferguson, Jr., his wife Jeanie and two grandchildren Connor and Sydney; his sisters, Pauline Ferguson-Trotter of Marianna, FL and Mary Elizabeth Ferguson-Pelt and husband Harry Buddy Pelt of Bascom, FL. Brother-in-law Philip G. McMillan of Bascom, FL., and several nieces and nephews. He is preceded in death by his sister Rebecca Ferguson-McMillan. Henry was born in Bascom, FL on December 9, 1942, to James Paul Ferguson and Bulah Parish Ferguson. He grew up working on the family farm with his parents and three sisters, Pauline, Becky, and Mary. In 1960 Henry headed south to Oldsmar, FL later to become foreman of Bass Dairy, and during this time he attended Cattleman’s School in Garnett, Kansas. There after a few years later Henry along with wife & children moved to St. Petersburg, FL in which he worked in the plastering trade running a crew. Eventually he started a lawn service business alongside his son Hank, thereafter in 1982 the family demolition business H&H Fergusons’ Contracting, Inc. was established. Henry was an industrious and generous person. He loved family vacations to Disney World with his grandchildren and cherished the time spent with them. He often visited family and savored the memories made at gatherings and school reunions in Bascom, FL. He also enjoyed smoking fish and barbecuing for family cookouts and reminiscing about old times. Henry will be sorely missed by his family, friends, and all who knew him. Services are pending at this time. Please check back soon for updates.

The family of James Henry Ferguson created this Life Tributes page to make it easy to share your memories.

Send flowers to the Ferguson family.