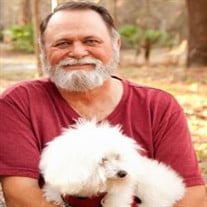 Gregory Wood, 73, has passed on September 6th, 2021, to be with his Lord in Heaven. He is survived by his loving wife Terri of 31 years, 5 children: Steven, Scott Keith, Wayne Scott, Lisa, and Tim. As well as 20 grandchildren, and 7 great grandchildren.... View Obituary & Service Information

A short story of the life of Gregory Wood

Send flowers to the Wood family.