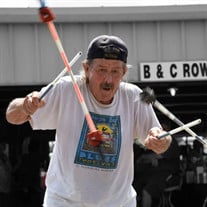 ‘The Stickman’ Gregory Alan Musille Blessed Everyone March 22, 1947 – April 6, 2022 Never To Be Forgotten When you think of integrity, you think of Greg. When you think of humanity and love, you think of Greg. When you think of loyalty, you think of Greg. When you think of someone genuine, you think of Greg. When you think of someone devoted, you think of Greg. When you think of honesty, you think of Greg. Greg felt you should never take life lightly but always with love. A few of his most influential attributes to life are (in no particular order) –  Entertainer – especially with his enormous talent of being “The Stickman”. Wherever he went all people – young and old – thoroughly enjoyed this special talent. Because of his love of music he attended many festival, concerts, etc. The last few years of his mother’s life, both entertained with ‘sticks’.  As an avid music lover of all kinds - the Blues was his absolute favorite. Anyone would be impressed with his music collection in all forms of media.  Never met a stranger and always made one feel joyful just knowing him.  Special talent as a video-photographer creating special memories for many people.  Providing a home and stability for many others.  His service to the USA as a Marine serving in Vietnam. Even there he created an atmosphere of brotherhood away from home – especially with a lifelong bond with his Brother Dan. They had such a special bond that Greg is God Father to Brother Dan’s three children and six grandchildren.  Loved to play pool. Many friends spent lots of time in his ‘pool lounge’.  In his early years, Greg was an outstanding car racer winning numerous races and was solicited by sponsors. However, this vocation was ended when he had a very sever accident which he defied all odds and lived to bless innumerable people.  Greg loved Tampa Bay Buccaneers – even had a bedroom dedicated to the team. Greg was born and raised in Mansfield, Ohio, by his mother Naomi Ford Musille and father Jim Musille – both preceded him in death. Also, his grandparents, Homer and Lela Ford, who were very influential, preceded him. Anyone Greg knew well during his life, he considered family. When Greg moved to Florida about 30 years ago, being the outgoing person he was, he developed an enormous family of friends and neighbors. Everyone will miss him greatly but will have a big smile in their heart for the privilege of living life this such an exceptional, influential, fantastic man!

The family of Gregory "The Stick Man" Musille created this Life Tributes page to make it easy to share your memories.

Send flowers to the Musille family.