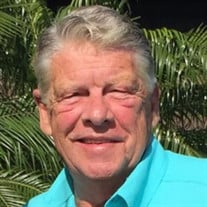 Fredrick A. Dickmyer, 75, of York, Pennsylvania and Hamilton, Ohio, passed to heaven Wednesday, September 22, 2021 in Gulfport, Florida. He was a US Army veteran having enlisted at age 18. He served three tours of duty in Vietnam as a Green Beret Airborne Ranger, as well as the 101st and 82nd Airborne Divisions. Fred retired from the army having achieved the rank of Sgt. Major. He was awarded numerous medals for service including three awards of the Purple Heart, three Meritorious Service Medals, Army Achievement Medals, National Defense Medals, Army Service Ribbon, Overseas Service Ribbons, Master Parachutist Badge, Vietnam Service Medal with four campaign stars, Republic of Vietnam Campaign Medal, Vietnamese Cross of Gallantry with palm, Overseas Service Bars, the German Army Marksmanship Award and other distinctions and awards. Always a great companion with the gift of gab; Fred was modest about his military accomplishments. Much of this information may surprise many because he rarely, if ever, spoke of his achievements. As a member of the Maderia Beach Legion Riders, Post 273, Fred enjoyed riding his Harley with his friends and for charity. He had a passion for gardening and enjoyed his furry companion, Inca. Fred is preceded in death by his wife Ronna and his parents C. Fred Dickmyer and Jean Ruppert Dickmyer. Missed and loved by all, he is survived by four children, Frederick Baublitz and wife Linda, Rick Dickmyer and wife Tammy, Kurt Vaughn and wife Heather, daughter Jeana Crawford; seven grandchildren, Eric Dickmyer, Megan Dickmyer, Tyler Hall, Luke Hall, Alexander Peterkin, Kloei Puga; six great grandchildren; his sisters Karen Snyder and husband Stan, Cindy Dickmyer and wife Sue Warchola; nephew Michael Bordner, niece Michelle Beyer, and many friends. A Celebration of Life will be held on Saturday, November 20th, 2021 at Maderia Beach American Legion Post 273. In lieu of flowers, memorial contributions may be made to Maderia Beach Legion Riders Post 273.

Fredrick A. Dickmyer, 75, of York, Pennsylvania and Hamilton, Ohio, passed to heaven Wednesday, September 22, 2021 in Gulfport, Florida. He was a US Army veteran having enlisted at age 18. He served three tours of duty in Vietnam as a Green... View Obituary & Service Information

The family of Frederick Allen Dickmyer created this Life Tributes page to make it easy to share your memories.

Fredrick A. Dickmyer, 75, of York, Pennsylvania and Hamilton,...

Send flowers to the Dickmyer family.