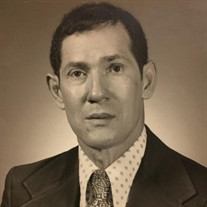 Francisco Noel Mosqueda, 86, of Kenneth City passed away peacefully on November 29th, 2021. He was born December 3rd, 1934 in Holguin, Cuba. He had a dream when he was a little boy. He wanted to live in a country that was free. He wanted to work hard and be able to provide for his family. He pinched himself when he boarded the plane leaving Cuba because he just couldn't believe it was actually happening. He left Cuba on November 20th, 1970 and arrived in Miami, Florida. A few years later, he later became a proud American citizen. In 1973, Francisco married the love of his life, Marianna DiSalvo in Highland Falls, New York. They remained married for 48 years until he passed. He was a dedicated and loving husband. Francisco and his wife had one child, their daughter Susannah. He proudly worked for the United States Military Academy at West Point, New York for 30 years. He moved to Florida in 1998 and then worked for Pinellas County Schools until he retired for a second time in 2014. While he was retired, he worked diligently on his lawn, enjoyed chatting with old friends, went on long walks, and watched Wheel of Fortune and Jeopardy every evening. Francisco was known by several endearing nicknames, Frank, Frankie, Noel, and Noelito. He was dearly loved by all who knew him. Although he left Cuba 52 years ago, he remained in close contact with his family there. He was known as the uncle beloved by all. He is survived by his wife Marianna; his daughter Susannah and her husband Marc Gariepy; and his five grandchildren Noah, Isaac, Sophia, Maggie, and Peter. Francisco was one of kind. He will be dearly missed by his family near and far. The Funeral Mass will be held at Sacred Heart Catholic Church, in Pinellas Park on the morning of December 17, time to be determined. Eternal rest grant unto Francisco, O Lord, and let perpetual light shine upon him. May his soul, and the souls of all the faithful departed, through the mercy of God, rest in peace.

Francisco Noel Mosqueda, 86, of Kenneth City passed away peacefully on November 29th, 2021. He was born December 3rd, 1934 in Holguin, Cuba. He had a dream when he was a little boy. He wanted to live in a country that was free. He wanted to... View Obituary & Service Information

The family of Francisco N. Mosqueda created this Life Tributes page to make it easy to share your memories.

Send flowers to the Mosqueda family.