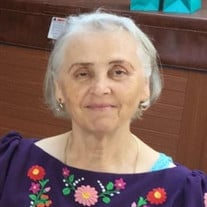 Emerencia Havasréti August 8, 2021 Emerencia (“Enci”) Havasréti of St. Petersburg, FL., passed away Sunday, August 8, 2021. She is survived by her daughter Star Bócsi, her son Béla Paul Havasréti and their spouses Zsolt Bócsi and Joy Havasréti, her sister Margit Kaitar and family. Enci was born in Fogadj Isten, Hungary, the middle child of five children. She was a very good student excelling in school, she loved mathematics and loved to read. After the 1956 revolution in Hungary, her family decided to defect from the communists. The entire family, including her little brother who was just a baby at the time, snuck out of Hungary through snowy fields and mountains. They all made it through safely and stayed in a refugee camp in Austria until they were issued visas to come to the United States. In the United States, Enci went to school, learned English and enjoyed reading books. Then one day, a handsome young gentleman showed up at her home and asked her to go on a double date with her sister. Enci instinctively dropped her book and accepted the date. Eight months later they were married and within a year they welcomed their first child, Star. Three years after Star’s birth their son Béla Jr was born. Enci’s husband, Béla was a wonderful, devoted husband and father and he loved Enci and both of their kids very much. Béla worked hard in his own construction business to provide for his family and made sure Enci could stay home with the children until they were school aged. At home with the kids, Enci learned to cook and bake like a top-notch gourmet chef! She also became an excellent seamstress making many adorable clothes for her children. She was a very loving mother who always found time to spend with her children. Both she and Béla taught the children Hungarian, English and mathematics as well as many other subjects. Once the kids started kindergarten, Enci started working part-time in her mother’s restaurant. She dropped the kids off at school in the morning and was there to pick them up when they came out. Bela was advised to give up the dusty construction work and he decided the family should move to Seattle. There, he found good opportunities for work and a better environment to raise the children. Béla went alone at first to set up a place to live and get a job. Enci sold everything, except the car and drove across the country with the kids. They were 10 and 7 at the time and both helped Enci navigate during the long drive. In Seattle, Enci first worked as a waitress at the Pancake Chef restaurant and rose quickly to become the manager of the restaurant. She then moved on and was hired as a manager at Denny’s. In 1988, Enci announced that she would like to open her own restaurant and move to Florida, where her mother and sister were already residing. Enci’s restaurant (“NC’s”) was opened in Pinellas Park, Florida. Enci and her daughter, Star got things running and then Béla joined them from Seattle. Their son, Bela Jr stayed in their Seattle home. For 2 years they ran a very popular and successful business. Unfortunately, Enci was injured and couldn't tolerate the long hours on her feet. They sold the restaurant and moved back to Seattle.   Enci then became a realtor like her sister, Margit. Enci was very successful as a realtor and often made the “realtor of the month.” However, again having to spend long hours on her feet, Enci eventually decided she would rather be an Escrow Officer. She became a Limited Practice officer (LPO), a person licensed by the Washington Supreme Court. Applicants must pass a difficult test of their knowledge of real estate law and must establish that they possess good moral character and the requisite fitness to practice law. She was consistently a top producer where she worked at Chicago Title as an LPO Escrow Officer until she retired. In 2018, Bela and Enci moved back to Florida to be close to their daughter, Star. They knew their son would soon retire and also move to Florida with his wife, Joy. Unfortunately, Enci was diagnosed with Dementia and was moved to a care home. Enci was a beautiful, smart, determined and resourceful woman who never shied away from hard work. There was nothing she couldn’t do and she excelled at whatever she undertook. She loved to cook, bake, and sew. She also loved working in the garden and listening to Béla play the piano. Enci and Béla were happily married for 61 years and they were very much in love. They were extremely, loving and supportive parents to their two children. Enci was predeceased by her parents and siblings Steve and Albert. She was an exceptional wife, mother, friend and human being. She was beautiful, smart, fun, and a very talented cook and seamstress. People loved to be around the couple, always in awe of her delicious food and his music. We will always remember her beautiful smile and her ability to win over anyone by way of their stomach. She is already painfully missed, but will live on in our hearts and memories forever. Even though her physical absence hurts, we know she is in a better place, at peace now with her loving, devoted husband, Bela. We will always love her dearly. To send flowers or a memorial gift to the family of Béla Havasréti please visit our Sympathy Store. If you’d like, in lieu of or in addition to flowers, please make a donation to the Alzheimer’s Association: To send a check: ALZHEIMER’S ASSOCIATION NATIONAL PROCESSING CENTER P.O. BOX 96011 WASHINGTON DC 20090-6011 To donate by phone: 24/7 HELPLINE 800-272-3900 To donate online: https://www.alz.org/ (Click on the big, green “Donate” button on the top right)

The family of Emerencia Havasreti created this Life Tributes page to make it easy to share your memories.

Send flowers to the Havasreti family.