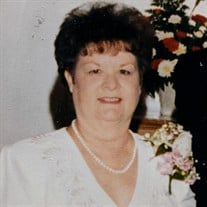 RICHASON, DOROTHY MAE BALLINGER, 77, of St. Petersburg, died Saturday (July 10, 2021). She was originally from Centerville, Arkansas. She was born to Willie Alvin Ballinger and Laura Elizabeth Garner Ballinger and had 5 siblings: Mary Ballinger (DeLay), Larry Ballinger, Raymond Ballinger, James Ballinger, and Walter Ballinger. Dorothy was a graduate of Ola High School (Arkansas). She met her future husband, Owen E. “Buzz” Richason III (deceased) while he was stationed at the U.S. Air Force base in Little Rock, Arkansas. She moved to Florida when she was 19 years old, and worked as a cashier clerk at Webb City, St. Petersburg. She later became a bookkeeper at a local bank. She and Owen were wed in 1966. Beginning in 1979, they together ran a business, Bud and Son Mobile Homes which had been passed down to them from Buzz’s mother and father, Owen E. “Bud” Richason, Jr. and Frances Belle Anderson Richason. Dorothy and Buzz had two sons: Owen E. Richason IV (wife, Jennifer Johnson Richason and grandson, Owen E. Richason V) and Chad E. Richason (wife, Tracey Dewey Richason and granddaughters, Kaylie Richason, Anna Richason, and Leah Richason). Dorothy’s husband Buzz passed away at just 50 years old in 1995, but she continued to run their business until about 2005. Dorothy enjoyed her time in retirement caring for her family and spending time with a few close friends. Dorothy’s health began to fail in recent years, and she moved to an assisted-living facility at the Vineyard Inn (Seminole, Florida) where she was cared for wonderfully by the staff and made many friends. Dorothy is also survived by her sister-in-law, Cheryl Richason Crabtree (husband, Randy Crabtree and nephews, Michael Lumsden (grand nephews, Austin and Andrew Lumsden and grand niece, Ashley Lumsden Hare), Christopher Lumsden, and niece, Vickie Grantham (great niece, Audrey Grantham). Dorothy will be fondly remembered by those that knew her for her petite frame, stubborn will, thriftiness, Arkansas-accented laugh, and twinkle in her eyes.

The family of Dorothy Mae Richason created this Life Tributes page to make it easy to share your memories.

Send flowers to the Richason family.