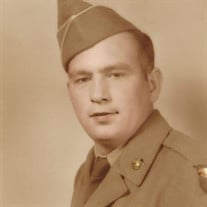 Donald E. Howard, 91, passed away Tuesday, November 30, 2021. Graveside funeral services, with military honors, will be held at the Sarasota National Cemetery on December 14, 2021, at 10am. Born September 30, 1930, in Dearborn, MI, he was the son of the late Thomas and Mildred Howard and the husband of the late Gloria Howard (Bylund). He is survived by his brother David Howard, his two sons, Thomas and Keith Howard and their wives, Jerry (Grispino) and Annette (Pendleton), respectively. He is also survived by his three grandchildren, Andrea Howard, Zachary Howard, and Connor Howard. He was preceded in death by his siblings, Bill Howard, and Barbara Walther (Howard). Donald was a wounded veteran of the Korean War and was a 23-year veteran of the Allen Park Police Department as a law enforcement officer (retired). Donald was a beloved husband, father, grandfather, and a devote Christian. He had a daily walk with his Lord and a faith in Christ that was visible with everyone that met him. Memorial Park Funeral Home at 5750 49th Street North St. Petersburg, FL is overseeing final arrangements. Donations in lieu of flowers can be made to the Disabled American Veterans at www.dav.org

The family of Donald E. Howard created this Life Tributes page to make it easy to share your memories.

Send flowers to the Howard family.