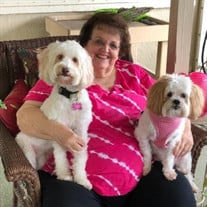 Dianne Blakeney Horton, 77, of St. Petersburg, FL passed away peacefully on November 30, 2021 at the Pinellas Mid-County Hospice Care Center surrounded by friend Judy Taylor and daughter Holly. Dianne was born in Crystal Springs, Mississippi to Lionel and Dorothy Blakeney on April 6, 1944 and they later moved to St. Petersburg. She has a younger brother, Norman “Kenneth” Blakeney. Dianne attended Glen Oak Elementary School, Southside Junior High, and graduated from St. Petersburg High School in 1962. Soon after she enrolled in the newly founded Mound Park School of X-ray Technology where she received her certification. In her late 20’s Dianne married O. Chuck Horton, a professional stagehand and electrician, and in 1971 Holly was born. Dianne and Chuck were both avid pet lovers having had numerous dogs and cats. Dianne was employed by Dr. Joseph C. Rush for 30-years as a radiology technologist. Upon Dr. Rush’s retirement, she was employed by Edward White Hospital as a medical transcriptionist. In 1991 Dianne started her own transcription service, Pro-Typing Services, Inc., from which she retired in 2012. Husband Chuck passed away on April 20, 2013. After his passing, she continued to summer at their Cedar Mountain, North Carolina home and enjoyed sitting on the front porch reading books, talking with friends, and watching the wildlife stroll by. She loved spending her summers in North Carolina home and all of her friends and neighbors up there. Dianne is survived by her daughter Holly McKelvey and husband Michael, her brother Norman Blakeney and his wife Chris, niece Kimberly B. Covher and husband Brett, and cousin Ann Kent and husband Alister, and special dogs Molly and Gracie. Dianne was appreciative to Dr. Rush and the Rush family as he emphasized the importance of a family life and this allowed her, Chuck, and Holly to travel during the summer. Dianne also wanted to thank Price, Hoffman, Stone and Associates for believing in her and supporting her in starting her own transcription company. She worked hard but was able to have a good retirement and cherished all of her friendships with the radiologists, doctors, and friends she met along the way. There will be a graveside service at 1 pm on Wednesday, December 8, at Memorial Park Cemetery, 5750 49th St N, St. Petersburg, FL 33709. In lieu of flowers, donations to Suncoast Hospice are requested.

The family of Dianne Horton created this Life Tributes page to make it easy to share your memories.

Send flowers to the Horton family.