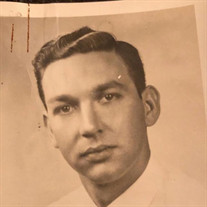 INTRODUCTION: Charles Eugene Frame Sr passed away at age 90 living a full, happy, helpful and giving life during the his time here on earth. He was known as Gene to close family and friends, to immediate family he was known as Pop, also Mr. Gene, by all those that loved and respected him. Age takes its tolls as we move closer to God and our end of time. We thank God for his peaceful passing to Heaven. He passed peacefully in sleep the morning of November 3, 2020. FAMILY: Gene was married to Dolores Jean Frame (maiden name Stewart) for 67 years until her passing in 2017. Unfortunately, his death was preceded in death his youngest son Ordeth and his grandson Justin. Gene Sr is survived by sister Eleanor Smith, children: Gene Jr., Vickie White, Patricia Bott along with eight grandchildren and seven great grandchildren. BIOGRAPHY: Gene was born on October 25, 1930 in Charleston, WVA. He was born at home, which was common practice during that time. He was the eleventh of twelve children (7 sons and 5 girls) born to James Frame and Bertha Friend Frame. Uniquely, he was the seventh son of a seventh son. Gene enjoyed academics and sports during his youth. He ran track and practiced boxing under the tutelage of his older brother Cliff where both brothers participated in Golden Gloves Boxing. He graduated Charleston High School in 1949 where he was President of the National Honor Society. Gene joined the US Air Force shortly after high school and completed basic and advanced training in San Antonio, TX. He married Dolores Stewart Frame (Dee) on December 29, 1950 in Charleston, WVA and was deployed to North Africa shortly afterward the ceremony. Gene was later stationed at Craig Air Force in Selma, AL. He had quickly rose to the rank of Staff Sargent. Gene and Dee developed several close friends in Alabama and decided to start their family there consisting of two boys and two girls (Gene Jr., Vickie, Patty and Ordie). He was a traveling salesman covering all states between Mississippi and West Virginia. He was often on sales trips which usually lasted two weeks before returning home. Gene and Dee had fallen in love with St. Petersburg after making several trips to see family, so in 1965 they made the decision to pack up the family and move to Florida. This move also provided greater career opportunities for both Gene and Dee. Gene joined Wallace Pharmaceuticals, which greatly decreased his time away from family and Dee became the first Sears female Credit Manager in the southeast. Gene received five “Salesman of the Year” awards while at Wallace and was always a top performer hand-picked to train new employees. He was offered several promotions which he declined because these positions required travel and he wanted to maximize time with family Gene started golfing again in Florida with friends Bob Cook and Rudy Sharp. Gene and Bob were both from West Virginia. They came up with an idea to white wash the old style tile roof. They made a home made concoction and applied it to the roof. The roof looked great until the concoction dried out and was beaten by the Florida sun. Shortly thereafter white flakes resembling snow blew from the roof and covered the lawn. Dee was not happy with this snowflake outcome so the problem was quickly rectified with a new professional process. Gene and Dee purchased a retirement cottage in Murphy, North Carolina located in the Bear Paw subdivision. They made frequent trips between home and the cottage enjoying the Carolina seasonal changes and occasionally just to beat the Florida heat. They continued these trips until sometime around 2012. Gene and Dee are peacefully together in heaven now. They will always be missed but never forgotten.

INTRODUCTION: Charles Eugene Frame Sr passed away at age 90 living a full, happy, helpful and giving life during the his time here on earth. He was known as Gene to close family and friends, to immediate family he was known as Pop, also Mr.... View Obituary & Service Information

The family of Charles E Frame Sr created this Life Tributes page to make it easy to share your memories.

Send flowers to the Frame family.