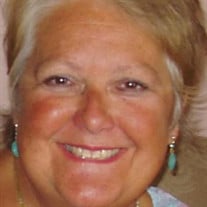 Carleen Hazel Proulx, 73, of St. Petersburg, FL, passed away peacefully at home on Friday, July 23, 2021. Carleen was born on January 22, 1948 in Attleboro, MA to the late Carlton Smith and the late Rita (LePage). Known previously as Carleen Hazel Smith, she graduated from Attleboro High School in 1966. In the same year, she married her high school sweetheart Roger E. Proulx. They were happily married for nearly 55 years before she passed. She worked at Atom Lure Mfg. as Office manager and bookkeeper for many years and at Boston Mutual Ins. Co. While raising her children in South Attleboro alongside her husband, she loved to travel to the beaches of Rhode Island and Cape Cod, MA. She enjoyed camping and traveling to the White Mountains of New Hampshire or Mohawk Trail, especially when she was able to catch a glimpse of the foliage. Everyone who knew her wanted to be near her. She hosted many gatherings with family and friends, always making everyone feel welcomed and loved. 18 years ago, she moved with her husband to Florida to be with her two adult children, Carleen was an inspirational mother. Both of her children were in wheelchairs, but she taught them to follow their passion, believe in themselves and live everyday to the fullest. She is survived by her husband Roger E. Proulx; daughter Dr. Rachael Haskell and her fiancé Schawn Williams of St. Petersburg; brother, Jim “Smitty” Smith and his wife LueAnn of Virginia Beach, VA; sister Debby Ruel and her husband Ken of Rehoboth, MA; sister-in laws, Sue, Mary Lou, Barbara, Liz and Janet; brother-in-laws, Robert, Eddie and the late Ron Proulx; mother and father-in-law Betty and Ed Proulx; as well as many cherished nieces, nephews, cousins and friends. She was the proud Godmother to many of her nieces and nephews as well. She was the mother of the late Rodney C. Proulx who passed away in 2011, sister of the late Andy Smith and mother-in-law of the late Rhoden Haskell. Carleen was loved by so many, with a beautiful soul and the biggest heart! She always had a smile on her face and a kind word for everyone she met. She left the world a more beautiful place than she found it. She will be truly missed. God’s Garden God looked around his garden and found an empty place; He then looked down upon the earth and saw your tired face. He put his arms around you, and lifted you to rest; God’s garden must be beautiful-He always takes the best. He saw the road was getting rough, and the hills were hard to climb; So he closed your weary eyelids, and whispered, Peace be thine.” It broke our hearts to lose you, but you didn’t go alone; for part of us went with you the day God called you home.

The family of Carleen Hazel Proulx created this Life Tributes page to make it easy to share your memories.

Send flowers to the Proulx family.