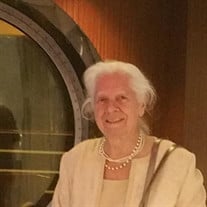 Betty Maloney was born on February 6, 1933 in Leeds, Yorkshire, England . She passed at her daughter’s house in St. Petersburg, Florida April 4th, 2021. She is predeceased by her husband Colin Jackman who was killed in 1976 and her second husband Thomas Maloney who also predeceased her. She is survived by her two children, daughter Karen Kingswell and her husband Kevin Kingswell and her son Graham Jackman. She also leaves her grandchildren Christine Wesley, Dawn Brown, Haley Jackman, Holly Jackman Ashley Dileonardo and her husband Scott. Great grandchildren Paige, Tristen, Rhylee, Ben, Brandon, Chase and Isaiah and Great Great granddaughter Genevieve. In England she trained as a social worker and mainly dealt with troubled young people. Often, she would bring them home for dinner. We never knew who was coming as children, but they always seemed nice. She continued to work with people after moving to the USA and worked as a social worker in a nursing home in West Palm Beach for several years before finally working for sport fishing boat builders Mark and Bonnie Hauptner. As a child she survived World War II from the age of 6 – 13. During this time, she had to move frequently because of bombing. This is where she got her love to travel which she has done extensively during her life. As children my brother and I would often wake up on school holidays to find that we were going away somewhere for the day. Our grandmother would often join us and off to town to the main bus station we went. Whichever bus came in first was the one we took. It did not matter if it was going to the coast, the country or a market, we were on it. As a family we often walked 20 miles over the Yorkshire Moors from where we lived to Ilkley and then caught the bus home. Betty continued to travel in America and at one point went to Nepal with her niece to bring home a brother and sister that her niece had adopted. There were lots of family trips to Disney, camping, New Mexico and to Hong Kong. A few years ago, she travelled on a 4-month world cruise with her sister. He love for travel never stopped and was usually with the family she loved. When looking for photos to post it was very hard to find any of her on her own. In all the hundreds and hundreds of photos taken they were all with family. She never lost her sense of humor and even at the end would still joke with her grandchildren. Memorial is on Saturday May 1st, 2021 at the Memorial Park Funeral Home in St. Petersburg. Her ashes will be scattered on the Yorkshire Moors in England as she wished.

Betty Maloney was born on February 6, 1933 in Leeds, Yorkshire, England . She passed at her daughter&#8217;s house in St. Petersburg, Florida April 4th, 2021. She is predeceased by her husband Colin Jackman who was killed in 1976 and her second... View Obituary & Service Information

The family of Betty Maloney created this Life Tributes page to make it easy to share your memories.

Send flowers to the Maloney family.