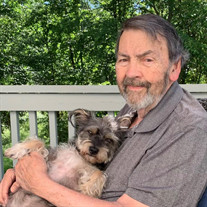 Barry Eugene Wright (Pop Pop), 86, February 9th, 2022, Downingtown PA On February 9th, 2022 after being on hospice for a short period, Gene died peacefully surrounded by the family he loved. The day was filled with memories, his favorite food (black beans and rice), Jeopardy, and listening to his favorite music. Gene was born July 15, 1935 in Seagrove, North Carolina, to his mother Mary Emmaline Luck. He was raised by his paternal grandfather Walter Lee Wright and his wife Mary Margaret Wright. After his grandfather’s untimely death Mary Margaret and Gene moved to Asheboro, NC. It was there that he would meet the love of his life Joy Wittner Wright. They would become the greatest of friends. By their senior year he was crowned the class poet and she was the class clown, a perfect match was made. They attended different colleges, but after he graduated from Guilford College in Greensboro, NC they married. They went on to have two children, Wittner and Maribeth. He earned a Master’s degree from the University of North Carolina before moving to Florida. They resided in St. Petersburg, where he was a Spanish teacher at Clearwater High School for 30 years. After retiring from teaching, he went on with his wife Joy to open several assisted living facilities. After Joy’s death, he was lucky to find love again with Coralie Kerwin Wright and they married January 6th, 1996. Gene devoted his life and love to his children, grandchildren, and great grandchildren. He is survived by so many that loved him. His son Wittner Wright (Lisa), grandchildren Jonathan Wright (Laura), Whitney Wright, Olivia Wright, Kennedy Wright, and Landyn Wright, and great grandchildren, Easton and Nolan. His daughter, Maribeth Wright (Bryan), grandchildren Hannah Graham, Rachael Kuz (Chris), Anna Lee, Rebecca Graham, and Tommy Lee. He is also survived by Coralie Wright and her children Laura Turner and John Kerwin (Stephanie), grandchildren Aaron Turner (Tyler), Evan Turner, and Haley Kerwin, as well as his siblings Joyce Hensley, Donna McDowell, and Larry McDowell and his niece Kathy Boone. He has several more great grandchildren on the way. A special mention to his most faithful companion, his dog Willie. His love and devotion to his family was apparent to all that met him. He was the most devoted husband, father, grandfather, and great grandfather. His lasting impact will be felt for generations to come. A service will take place at Memorial Park Funeral Home on Monday, February 21st at 9:30 AM. Interment will follow at Memorial Park Cemetery. In lieu of flowers, please make donations to your local SPCA.

Barry Eugene Wright (Pop Pop), 86, February 9th, 2022, Downingtown PA On February 9th, 2022 after being on hospice for a short period, Gene died peacefully surrounded by the family he loved. The day was filled with memories, his favorite food... View Obituary & Service Information

The family of Barry E. Wright created this Life Tributes page to make it easy to share your memories.

Send flowers to the Wright family.